In recent years, fans of the 2D shooter form have had to adjust their expectations of what a port can be, largely thanks to the sublime M2 ShotTriggers series. In fact, we got pretty spoiled with this particular set of games.

A long-established convention in the history of gaming has been that console ports never quite meet the quality standards set by arcade originals. This idea does not seem to have deterred the long-time Tokyo software house M2. Their ShotTriggers series has delivered a plethora of ports of iconic shmups, often so good that it can be tempting to claim they trump the originals.

Switch owners were recently treated to M2’s exquisite porting of CAVE’s masterful 1998 arcade release ESP.Ra.De and the amazing Aleste Collection. Those lucky ones who are known as PS4 owners could meanwhile pick up the extraordinary implementation of M2 ShotTriggers Ketsui – perhaps CAVE’s most brutal contribution to the genre that so often defined it.

These ports came with a plethora of original modes, new arrangements and reworks or, in the case of Aleste, a completely new title. Each was decked out with an abundance of options and settings that even the most generous DIP switches on the arcade board wouldn’t, allowing players to optimize their experience significantly. Then there are the ‘M2 Gadgets’; a customizable set of HUD-like elements that convey all sorts of strategically valuable information to the player as they navigate through dense, sprawling curtains of glaring spheres – and, to be fair, a good deal of superfluous detail. But as any shmup gamer knows, you can never have enough detail about what’s going on under the pixels. 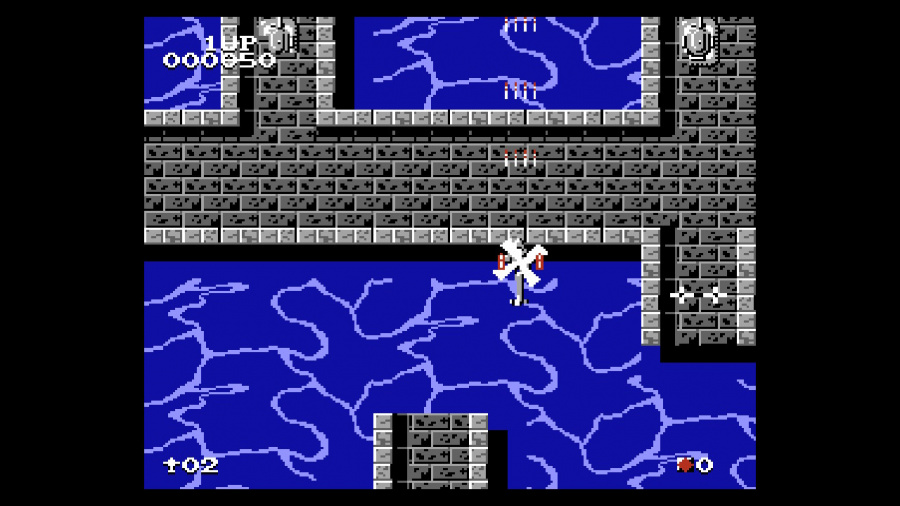 All of these things have resulted in M2 ShotTriggers releases becoming serious rivals to the arcade originals they revisit. A console sport will of course never capture the social experience that is played in a real arcade. But otherwise? M2 tends to get everything right and some more – including its ports of previous console ports of the arcade games in question.

And so here we are with the release of the first of the new M2 ShotTriggers sub-series Toaplan Arcade Garage – which over time will bring almost every game released by the studio to contemporary consoles. Toaplan may not have the cultural influence CAVE has across the video game culture landscape, but they are certainly just as important and enthusiastically celebrated by most Shmup aficionados. Why? Toaplan eventually debuted in the Bullet Hell genre with their delightful release Batsugun.

But that’s not all. When the outfit was closed, former Toaplan employees undoubtedly formed key 2D shooter outfits including Takumi, 8ing (AKA Raizing), Gazelle and – yes – CAVE itself. The team even developed Zero Wing, the game that spawned a meme has, which is probably a better known cultural phenomenon than the whole of spherical hell. In essence, Toaplan was perhaps the most important driver in developing the shmup genre from its primitive roots to the danmaku era. And so the first entry by Toaplan Arcade Garage focuses on two games that embody this journey and shine with modern features such as online leaderboards. 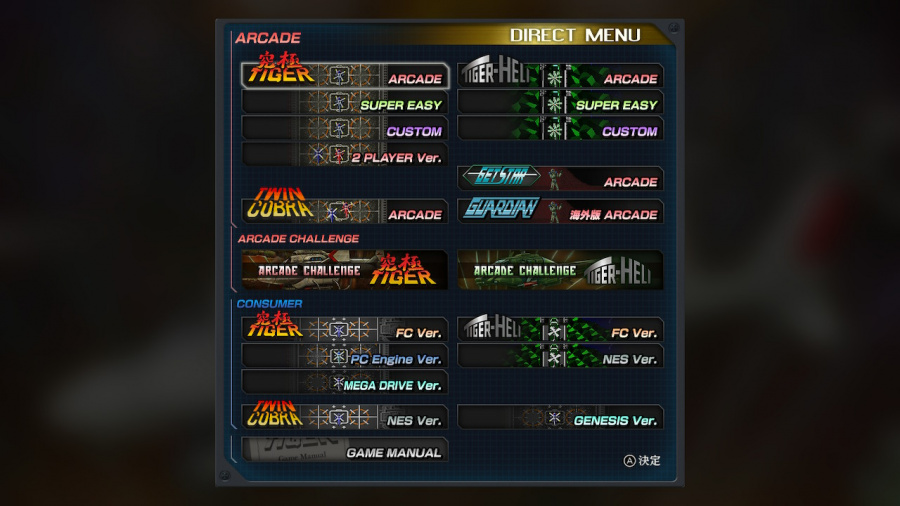 That means you get a port of Toaplan’s first 2D shooter, 1985 Tiger helicopter, and it’s the sequel from 1987 Twin cobra, known as Kyukyoku tiger in his Japanese homeland. Essentially, when it was released, Twin Cobra gave an early taste of a future where Shmups could be a lot busier while at the same time adding more energy and detail to the challenge they presented. Twin Cobra, on the other hand, garnished the genre with a new level of dynamism and verve. It certainly wasn’t bullet hell, but it wasn’t too far away either.

Toaplan Arcade Garage: So Kyukyoku Tiger-Heli delivers two very important shmups from a very important shmup company. With the porting quality of M2, is that all said and done? Well, not exactly, because “important” doesn’t always mean “timeless”. And it turns out that not every release of M2 ShotTriggers is exactly even.

Before your taste buds sink, rest assured this is a title full of quality. It simply draws comparison with its label mates, who happen to be the best shooter ports and compilations ever designed. Shmups is one of the least penetrable genres that naturally has to be a little confusing with Toaplan Arcade Garage’s debut. Because despite the title, you not only get countless versions of this single shooter idol. 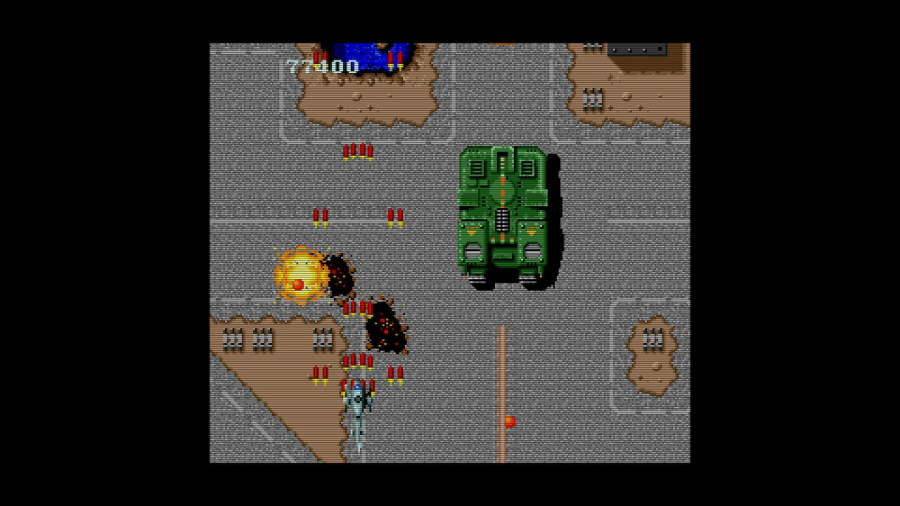 First, when you go digital, you get a selection of the games that come with the cartridge – but if you’re craving the full swing, you’ll have to invest in a decent amount of DLC. However, this review looks at the Japanese boxed version, which has essentially everything that is available in a single package. That means you get the arcade original from Tiger-Heli, as well as Famicom, NES, and Genesis ports. Then there is the arcade version of Kyukyoku Tiger, along with its Famicom, PC Engine, and Mega-Drive ports, as well as the NES version of Twin Cobra. Each of the games are also available in “Super Easy” modes, along with an Arcade variant that offers a wealth of customization and an “Arcade Challenge” mode that breaks the main games down into smaller sections that are tackled individually can. It’s worth noting that all natively vertical titles are FlipGrip compatible unless you’re rocking a Switch OLED. In this case, you have to improvise.

And then you get Toaplan’s somewhat mediocre scrolling beat ’em up from 1986 Guardian (known as Get star in Japan) and a download code for the curious arcade puzzler from 1991 Teki Paki. It’s not entirely clear why, but the Toaplan Arcade Garage series is believed to include some oddities with the major releases in order to deliver as many titles from Toaplan’s past as possible.

Tiger Heli is certainly a classic, and it’s great fun exploring the various ports, all of which seem just right – right down to the flaws of some console editions. However, it hasn’t aged perfectly and feels slightly compared to its contemporaries. Tiger-Heli is a loyal companion of its era, but this era itself has not aged flawlessly. It’s a reminder of another time and certainly serves to highlight how far the genre has come. 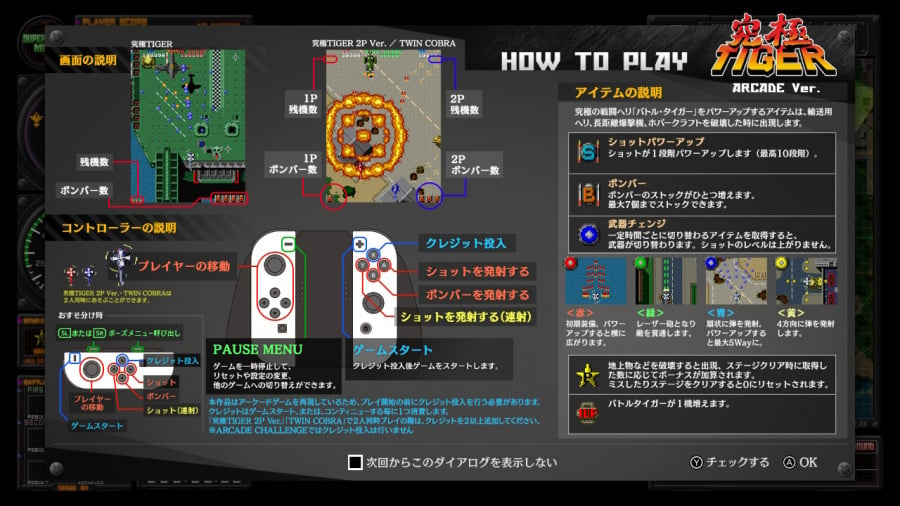 Twin Cobra, on the other hand, brings a lot more speed and excitement. It probably won’t convert you if you’re solely a fan of bullet hell, but if you have a penchant for thoroughbred military shooters, as seen in Capcom’s 1942 series and later works like Strikers 1945 and Toaplan’s own Fire shark, there is plenty to enjoy here. The same goes for anyone brimming with nostalgia for ’80s games. Indeed, Twin Cobra serves as a reminder that straight line military shooters are something of a forgotten shape compared to bullet hell, given that so many contemporary developers are focused on danmakus.

Today’s game in the arcade port also highlights the fact that Twin Cobra was remarkably ahead of its time in terms of complexity, gameplay, and technical skill, and is still today characterized by its vibrant energy. There’s a little too much idle breaking the rhythm of the game – transitioning between levels is arduous – but it remains a gem of its time that played a key role in creating bullet hell.

The opening volume of Toaplan Arcade Games clearly brings two very important games, even if none is as timeless as the creations of the following years: Batsugun, DoDonPachi and their kind. The port quality is meanwhile as finely tuned as the label M2 ShotTriggers suggests. And yet there is a lack of really new modes – the addicting and really undemanding Super Easy modes go a long way towards changing the dynamics through the ship’s speed of the higher-level players, and provide a more inviting challenge as they go out of their way to remove some of the excitement adopt the vanilla version. And yet Toaplan Arcade Garage’s first appearance does not contain any real new arrangements. In the meantime, there seem to be a few fewer setting options in the entire package. 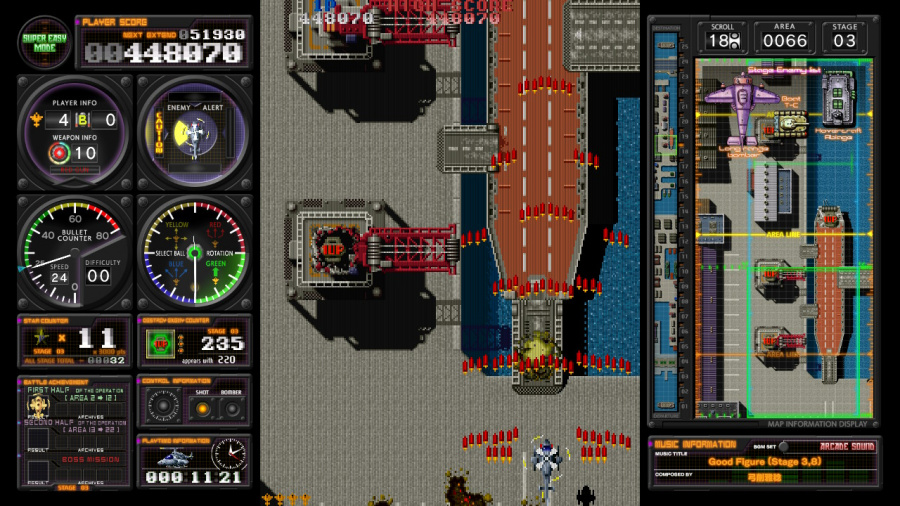 It’s worth noting that the menus and game guide text of this import are almost entirely Japanese, and there’s a lot. You don’t have to read Japanese at all to play the games yourself, but you may need to look for a translation or two to navigate the deeper menus and options.

Again, all of this is a comparison to the masterpiece ports from M2. Toaplan Arcade Garage: Kyukyoku Tiger-Heli presents a very high quality and extensive port of two crucial Shmups. But if the studio’s ESP.Ra.De celebrated both the game’s past and a modernization of its potential, Toaplan Arcade Garage: Kyukyoku Tiger-Heli is more of a direct archive release. Although it should be said that in direct comparison it significantly improves the now very collectable PS1 version Toaplan Gunfight 1that focuses on the same two main games and can set back a three-digit amount.

Guardian brings additional content, but little special in its familiar form. Its two-button punch-and-kickfest now feels almost charmingly simple, rather than grandly minimal and pure. There is at least a connection to Twin Cobra. Guardian marked the first work by artist Kōetsu Iwabuchi in games before creating the impressive styling of Twin Cobra. Teki Paki, on the other hand, failed commercially at launch and now feels too conventional to be really exciting, even if it was a little different in its time. 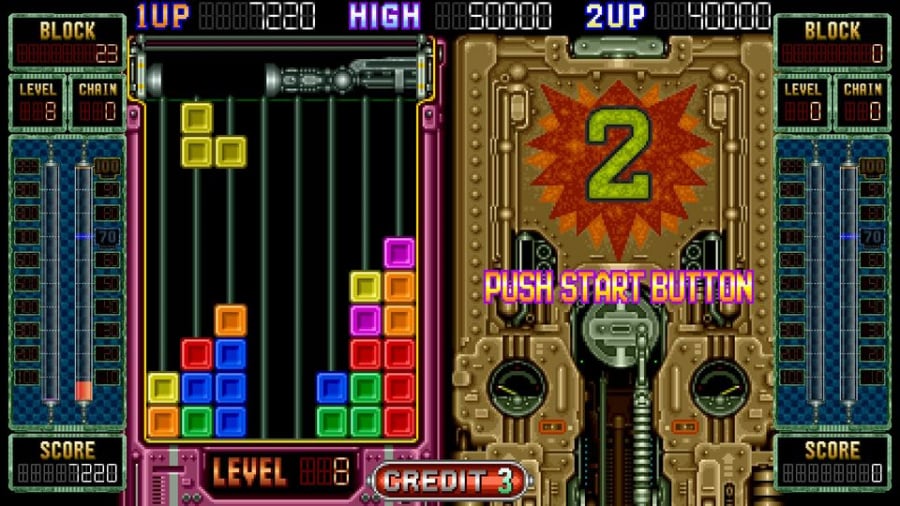 Clearing M2 out of the Toaplan garage inevitably brings out icons, gems and curiosities. If this compilation sets the standard then there are plenty of reasons to be optimistic about the times that the series will see Toaplan stars such Dogyuun, Tatsujin, Out zone, The same thing! The same thing! The same thing! and the one we are all waiting for, Batsugun. You can only expect them to battle for the cartridge slot with much lesser-known creations.

Sleep “May Be One Of The Most Affordable Ways To Reduce...

“There was a lot of money involved, but …”

Retro Nintendo games cost too much, but nostalgia is expensive