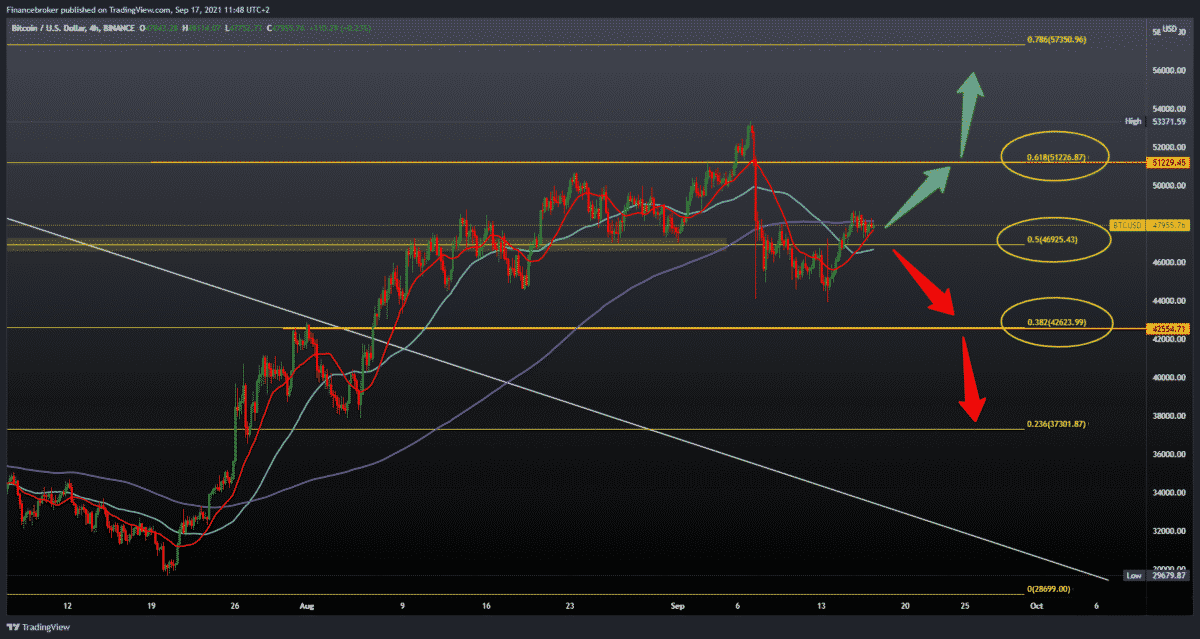 If we look at the chart on the four hour timeframe, we see that yesterday the price hit resistance at the 61.8% Fibonacci level at $ 3640 and after that we have a payout of up to 50.0% to 3520 %. We can now expect the price of Ethereum to continue with this pullback to 38.2% Fibonacci levels at $ 3400. Below that, the MA50 and MA200 moving averages are waiting for us as potential support, ie an obstacle to the continuation of the bearish trend. Should price continue on the bearish side for any reason, the next support is at the 23.6% Fibonacci level at $ 3250, where the lower trend of the support line awaits. For the bullish scenario, we need a positive consolidation at the 38.2% Fibonacci level with the support of the moving averages that will help the price get back to the upper levels on the chart. A bigger hurdle for us is the upper downtrend line and we need a break above it to continue the uptrend. 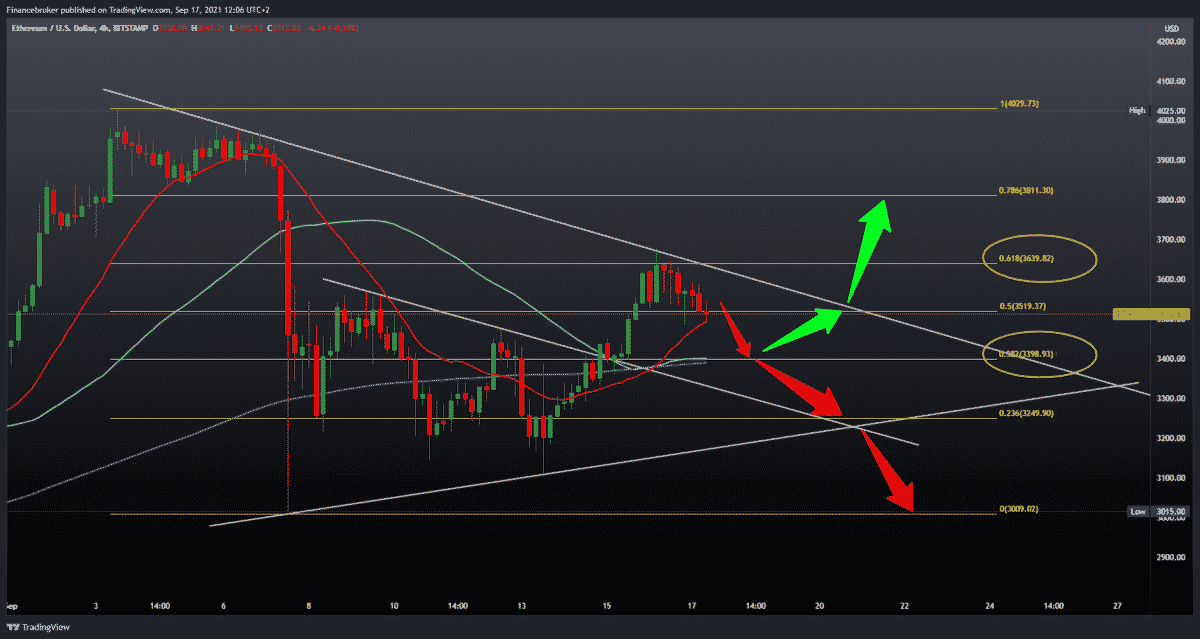 Analysis of the Dogecoin chart

If we look at the chart in the four hour timeframe, we can see that Dogecoin is consolidating in the 0.23000-0.26000 zone. Price movement is in a descending parallel channel and we see price move down below the lower line of the channel, with the MA20 and MA50 moving averages currently being tested. If the moving averages manage to provide more tangible support on the chart, we can initially expect growth to resistance at 0.26000 in the area of ​​around 50.0% Fibonacci levels. The maximum bullish target for this timeframe is the top line of this channel around the 61.8% Fibonacci level at 0.28000. This zone coincides with the MA200 moving average. For a possible bearish scenario, we need negative consolidation below 0.23000, with targets and potential support at the previous low of 0.21450. If the price breaks this support zone as well, then we need to think about lower possible price supports. 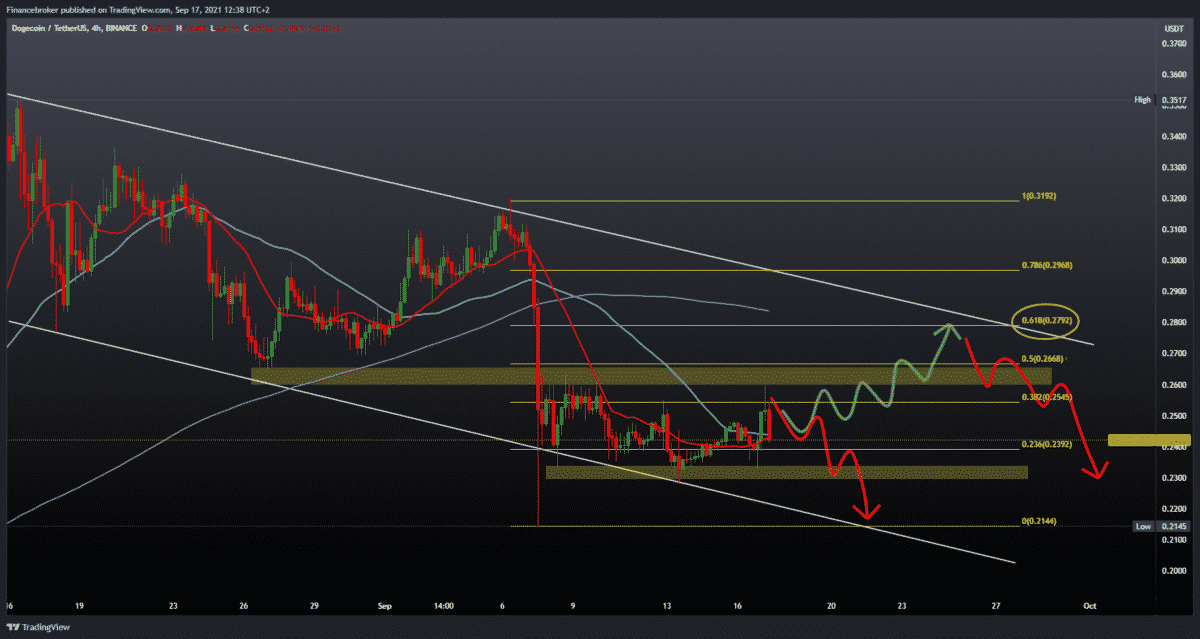 It’s been a little over a week since El Salvador started legal tendering with Bitcoin, and other countries are already considering it. Cuba was the next country to accept cryptocurrencies as a legal payment method with new regulations coming into effect.

The country’s central bank, Banco Central de Cuba (BCC), recently passed Resolution 215 of 2021. The resolution recognized digital currencies such as Bitcoin and thus allowed their use in the country.

According to local reports, the order became official two days ago, on Wednesday, September 15. With this, the country’s central bank has officially recognized cryptocurrencies – Bitcoin and Altcoins – that can now be used for financial transactions and investments.

At the end of August, the country’s central bank originally announced its decision to regulate and recognize digital currencies less than a month ago. Since then, work has been carried out relatively quickly on the creation of Resolution 215 of 2021, which contains provisions on the licensing regime for the exchange of digital currencies and other providers of virtual goods operating on national territory.

The crypto industry still bears its risks, about which the central bank has been very transparent. It has been observed that while digital currencies operate outside of the Cuban banking system, their use carries significant monetary policy risks and financial stability concerns.

Thanks to our Olympic and Paralympic heroes then and now

OnePlus 9 vs Samsung Galaxy S21: Which should you buy?

Stephanie Meadow will represent Ireland at the 2021 Olympics

Owen Wilson reveals that at the age of 11 he thought...

Should you buy KVSB SPAC shares before the next merger?

Worried too much about running out of money in retirement?

US stock futures pause ahead of Fed decision