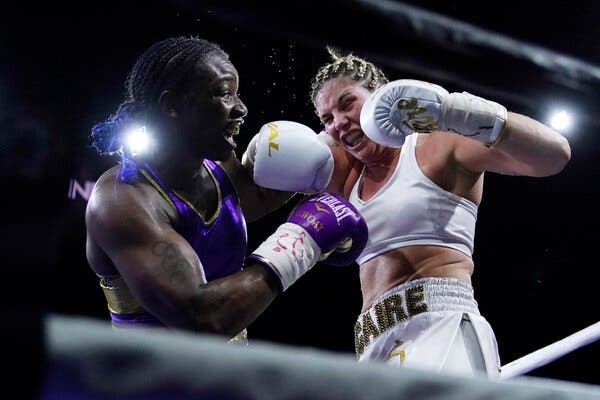 Shields, left, stayed patient and did not foul back when Dicaire got flustered.Credit…Carlos Osorio/Associated Press

Marie-Eve Dicaire is a black belt in karate, and that skill set might have helped her if she had met Claressa Shields in mixed martial arts, the sport in which Shields hopes to make her pro debut in June.

But the two women met in a boxing ring, where Shields is a two-time Olympic gold medalist and now an undisputed champion at 154 pounds after a lopsided win Friday night. Her victory capped an all-women’s pay-per-view card, and made Shields, a Flint, Mich., native fighting in her hometown, an undisputed champion in a second weight class.

Shields, now 11-0 as a professional, won every round on every judge’s scorecard, largely by beating Dicaire to the punch and baiting the 34-year-old Canadian into mistakes.

When Dicaire opened the bout circling left, Shields landed a well-timed right hand to the face. When Dicaire switched directions, Shields connected with a left hook. And when Dicaire would hold or wrestle or throw elbows as the fight progressed and frustration mounted, Shields wouldn’t foul in return. Instead she would lure Dicaire into corners, then blast her with clean punches as she lurched forward.

Afterward, during an in-ring interview, Shields mused about cutting down to 147 pounds to face England’s Katie Taylor, or moving up to middleweight to confront Savannah Marshall, the only fighter to defeat her as an amateur.

Shields peppered her challenge to Marshall with expletives, but even the clean parts made clear she’s ready to avenge a loss from 2012.

“I’ve been wanting smoke for years,” Shields said. “And Savannah Marshall can get it.”

Claressa Shields promised a knockout and she did not deliver it. But in every other aspect she dominated the fight, including a highly active 10th and final round.

Shields landed a good left hook, but was never able to uncork her right hand. Marie-Eve Dicaire continued her hyperactivity but, like the rest of the fight, mostly failed to land solid punches.

Shields wins with a unanimous 100-90 victory on all the judges scorecards.

After the fight, Shields seemed somewhat displeased about her performance. “90 to 100, I can’t be mad about it, but she just kept head-butting me and elbowing me,” Shields said during an interview in the ring. “I was trying to get the knockout, that’s what I really wanted, and I almost had it a couple of times.”

Shields beat Marie-Eve Dicaire in every round on all three scorecards to unify her title. She is still undefeated at 11-0.

Another dominant round for Shields. Dicaire’s aggressiveness makes the bout interesting, but it’s not competitive.

Grabbing your opponent doesn’t score points, and neither does throwing elbows, but those are Dicaire’s go-to moves. Shields, meanwhile, keeps landing right hands and left hooks, and, presumably, is widening her lead on the scorecards.

After spending a few rounds as the aggressor, Shields slowed down in Round 8 and there was much less action. The only way Shields loses this fight is if she walks into a knockout, and she wasn’t about to give Dicaire a chance to land a big blow.

The last 30 seconds featured a few flurries by both fighters, and as the round ended Shields barked at Dicaire as she strutted back to her corner.

Her Plan A is to circle and run in with occasional left hand leads. Plan B seems to involve circling, then running in to grab Shields. In between it all, Shields keeps landing punches.

A mid-round salvo from Shields likely won this round for her.

For the first time in the fight, it was Shields’s movement that dictated the sixth round. She spent the round stalking Dicaire, while Dicaire — sensing things were turning — wrapped Shields up at every opportunity. At one point, as Dicaire hugged her, Shields raised her arms and looked at the referee, seemingly exasperated.

Shields landed a couple of good shots, but wasn’t able to connect with the full power of her right fist.

Another round for Shields. Dicaire is game, but is in danger of a deep deficit on the scorecards. Shields lands when she shortens her punches and misses when she wings big shots. Still, she ended Round 5 with a 119-17 advantage in landed punches.

Dicaire ended the fourth round tangled with Shields, and the two fighters seemed to be chirping at each other. It was an appropriate end to what was probably Dicaire’s best round yet, as she landed a solid blow to Shields’s head. But as commentator Dan Cannobio said, Dicaire has been hesitant to wade into “the deep muddy waters” and really engage with Shields; she knows that is a dangerous idea.

Shields is beating an increasingly frustrated Dicaire to the punch. An early lead right caught Dicaire’s attention. Dicaire responded by jamming her forearm into Shields’s throat and driving her into a corner.

Shields answered that foul with a clean right to Dicaire’s forehead.

Shields opened the second round more aggressively than she did the first, unloading a few punches to Dicaire’s body early. Dicaire remained jittery, constantly walking and trying to make something happen with her movement. Shields stayed calm while waiting for an opening and landing occasional shots with her jab.

Neither fighter landed any major punches, but Shields looks like she could end the fight at any moment.

Claressa Shields and Marie-Eve Dicaire square off in the main event.

Their 10-round fight will determine the 154-pound champion.

Several fighters have thanked Claressa Shields for putting them on tonight’s all-women’s card. Jamie Mitchell, who beat Noemi Bosques by technical knockout, praised Shields as the G.W.O.A.T. (Greatest Woman of All Time) and for fighting for gender equality in sports.

“She set the platform for all women in boxing and combat sports,” Mitchell said after she was declared the winner.

Both fighters overcame rough childhoods to get to this point in their boxing careers.

Shields’s mother struggled with addition and her father spent years in prison. She was sexually abused by one of her mother’s boyfriends, and eventually moved in with her grandmother, whom she adored but who died when she was in 10th grade, before Shields made it to the Olympics. Afterward, her former coach, Jason Crutchfield, took her in, fed her and gave her both a stable place to stay and someone consistent to count on.

The story of Claressa Shields, a 16-year-old female boxer living in Flint, Mich. 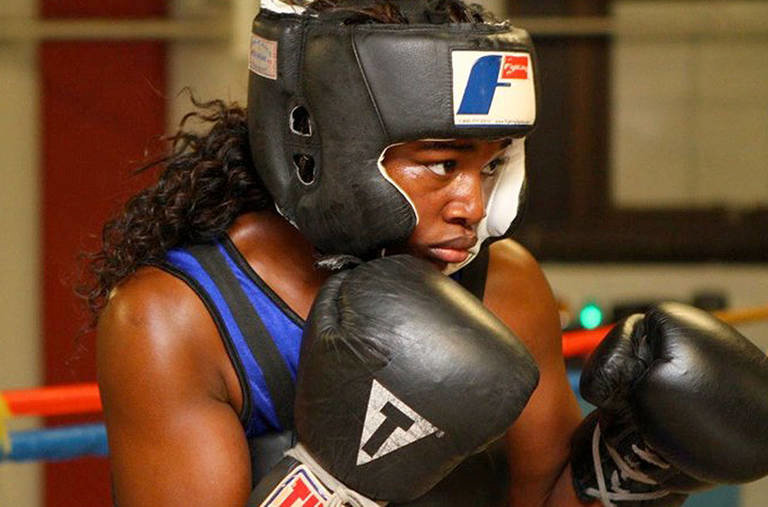 The story of Claressa Shields, a 16-year-old female boxer living in Flint, Mich.

Mitchell also had longed for that consistency.

When she was 10 days old, she was sent to a foster home because of her mother’s cocaine addiction. She never knew her father. With no family to count on, she lived in dozens of foster homes. At one, she was starved and tortured and was finally moved out of it when she was 6 after her arm was found to have been forcibly broken. That was just one of her 50 stops in foster homes.

Like Shields, Mitchell looked to boxing to escape her past.

When Danielle Perkins and Monika Harrison first squared off last August, Perkins, a 38-year-old heavyweight who played basketball at St. Johns in the mid-2000s, won every round.

Elsewhere in the combat sports world, that type of one-sided result wouldn’t call for a rematch, but women’s heavyweight boxing only features 14 active fighters worldwide, according to the online database BoxRec.com. With few opponents to choose from, Perkins and Harrison met again, this time with a title at stake.

The outcome didn’t change, though. Perkins, who is based in Houston and also played basketball professionally, landed 101 punches while Harrison connected just 21 times across eight rounds. The gap in athletic ability was glaring, with Perkins landing punches and dancing out of range, and sustaining her effort late as fatigue slowed Harrison.

Perkins, who is studying for a master’s degree in finance, is now 3-0 as a professional, and the win earned her a minor heavyweight title. 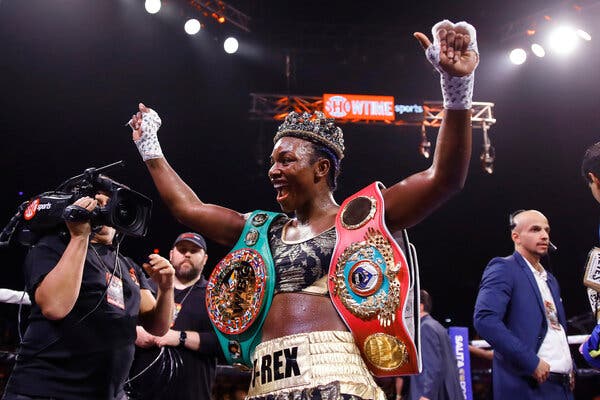 Shields with her belts after winning a bout in January 2020.Credit…Matt Rourke/Associated Press

The next time you watch Claressa Shields fight, she might not be boxing but grappling or wrestling her opponent.

Last year, Shields signed an agreement to fight in the Professional Fighters League, a mixed martial arts company that uses a season format for the sport. Shields has said she wants to compete twice in mixed martial arts in 2021, and then participate in the 2022 season.

Shields has been quite vocal about her belief that her boxing matches should be higher profile, and that she should be earning more money. She has also been quite clear about what she believes is the cause: sexism. “They’re always yelling equality, equal pay, equal opportunities, but they don’t mean it,” she told The Times. “Because all they have to do is say yes.”

Compared with boxing, more women have found a way to earn fame and riches in mixed martial arts, primarily in the U.F.C. Fighters like Ronda Rousey, Holly Holm and Amanda Nunes have all earned individual purses over half a million dollars, and regularly competed for hundreds of thousands of dollars.

Shields hopes to soon join them. 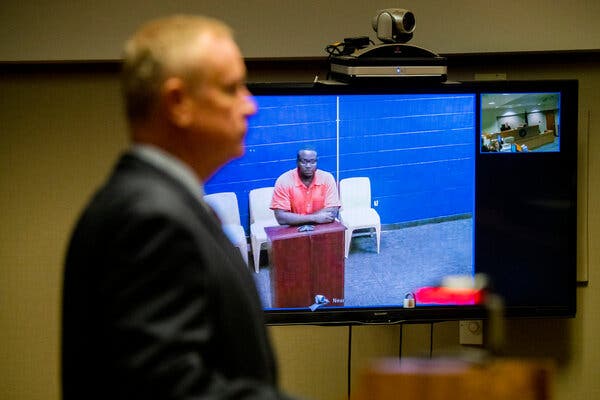 Artis J. Mack, the brother of boxer Claressa Shields, is serving a prison sentence for assaulting a trainer working for Shields’s opponent. He appeared on video at his 2019 arraignment.Credit…Jake May/Mlive.Com – The Flint Journal, via Associated Press

As the hometown favorite, Claressa Shields, a native of Flint, Mich., expects many friends and family members to be in the audience tonight to cheer her on. But her older brother, Artis J. Mack, won’t be among them.

Mack, 28, is in prison in Michigan for assaulting 68-year-old boxing trainer James Ali Bashir a day before Shields was supposed to fight Ivana Habazin in October 2019 in Flint. At the weigh-in, Mack punched Bashir in the head, sending Mack to the ground, where he hit his head and sustained face and head injuries, and was hospitalized. The fight, scheduled to be broadcast on Showtime, was postponed when Bashir couldn’t be in Habazin’s corner. He needed surgery to repair damaged teeth.

In an interview last month, Shields said Mack attacked Bashir just after Bashir had been verbally harassing their sister, but she didn’t see the situation unfold. She emphasized that her brother, who had a previous a criminal record, was not part of her fight team or entourage and that she didn’t condone what he did.

“A lot of people in boxing don’t like my brother and sister,” she said. “But I love my family regardless of what they do. If they do something that makes them go to jail, well that’s, you know, that’s on them.”

The fight against Habazin finally happened last in January 2020, in Atlantic City. It was the last time Shields fought before tonight.

Shields beat Habazin in a unanimous decision to win the vacant W.B.C. and W.B.O. 154-pound world titles. The victory made her the fastest three-weight division world champion in boxing history.

According to the Michigan Department of Corrections website, her brother is scheduled to be released from prison in July, if he is not granted parole before then.

Facebook, Google fight bill that would help US news industry

Bowlero Inks trades in the United States with BettorView